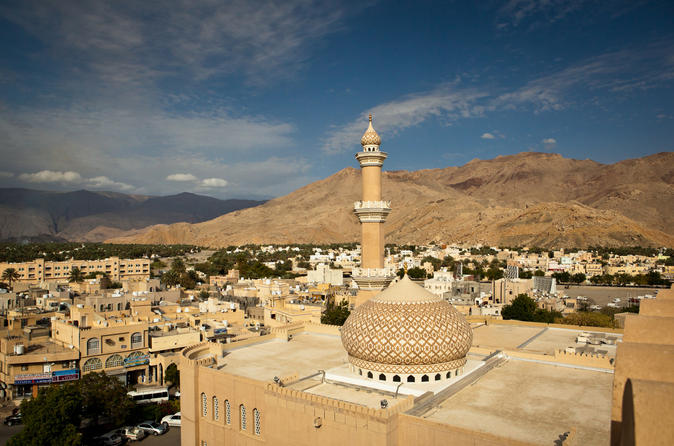 The tour begins by driving through the beautiful embassy quarter of Muscat en route to Sultan Qaboos Grand Mosque. You will stop to visit the mosque, a splendour of unique Islamic architecture. Next stop at the Bahla fort, the oldest and first Omani fort to be built in the Islamic style. The tour continues to Jabreen Fort, another famous landmark in the Al Dakhliya region, is considered one of the finest and most picturesque structures of its kind. It was built in the 17th Century, not as a fort but as a palace for the imams (Muslim clerics or prayer leaders). The design was later modified and the palace became a fort. It has been restored and thus one gets a good sense of what it looked like in its prime.

After lunch the tour continues to the honoured as the capital of Oman during the 6th and 7th Centuries, Nizwa is one of the oldest cities of the Sultanate and being the trade capital it is commonly known as the ‘Pearl of Islam’. Nizwa Fort, which was completed in the 1650s, is among Oman’s largest and oldest forts as well as one of the most visited national monuments. This historical edifice is hailed as a stunning example of ingenuity of Omani architecture and it is also a powerful reminder of the town’s invincibility through turbulent periods in Oman’s history.It took 12 years to build this magnificent military bastion and its sole purpose was to prevent marauders from looting Nizwa’s abundant natural wealth, as well as to protect its strategic location on the crossroads of vital caravan routes. The fort is characterised by its height, solid fortification and unique location in the middle of Nizwa town. Also not to be missed is Nizwa souq with its distinct Omani character, selling a wonderful array of silver jewellery, antiques, leather goods and household utensils.

You will then return to your hotel.