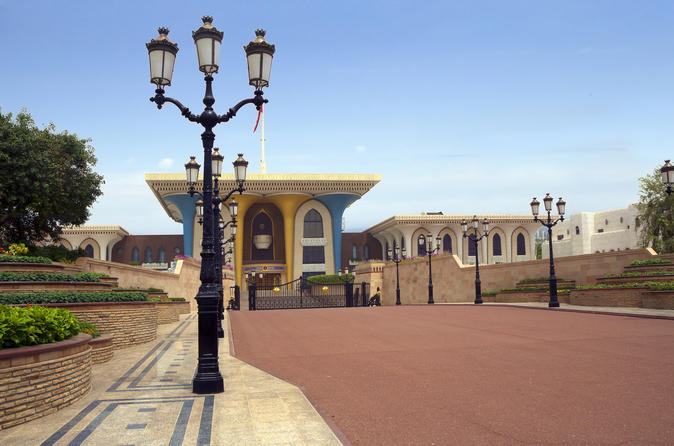 You'll start with a visit to the Sultan Qaboos Grand Mosque, built from 300,000 tonnes of Indian sandstone. The main musalla, or "prayer hall", is 74.4 x 74.4 meters square, with a central dome rising to a height of fifty meters above the floor. The dome and the main minaret, with its four flanking minarets, are the mosque’s chief visual features. Another major interior feature is the prayer carpet, which contains 1,700,000,000 knots, weighs 21 tonnes and took four years to produce. Twenty-eight colors in varying shades were used, the majority obtained from traditional vegetable dyes. It is the second largest single-piece carpet in the world, measuring over 70 × 60 meters, and covers the 4,343 square meter area of the praying hall. The chandelier above the praying hall is 14 meters tall and was manufactured by Faustig, from Germany.

Dress Code: women should wear attire covering their arms and legs and should cover thei head with a scarf. Men should wear normal shirt and long trousers.

After the visit, you'll reach the Bait al Zubair museum for a brief introduction that traces Oman's history and heritage. You'll then proceed to a photo-stop at the magnificent Al Alam Palace, official palace of His Majesty Sultan Qaboos, which is flanked by the 16th century Portuguese forts of Mirani and Jalali. Driving along the waterfront Corniche, you'll reach the colorful Muttrah Souq, where you can enjoy some free time for shopping.

Optional [Fees not included]: You'll then proceed to the Marina around 1:00 PM to embark on a traditional dhow sailing vessel for an amazing cruise that will lead you to Bandar Khayran Reserve. The boat ride should be made even more pleasurable with the accompaniment of some dolphins, which swim alongside the boats. You’ll enjoy seeing the rocky mountains and the whitewashed small houses that overlook the majestic sea. Coral reefs permeate the Bandar Al Khayran waters, considered home to many diverse organisms and fish. Enjoy your time in this wonderful place and discover the underwater world of Oman with a snorkeling mask. Addition charge for dhow trip is $55/Person